What Makes USB PD So Different from Other Types of Fast Charging?

What Makes USB PD So Different from Other Types of Fast Charging?

Whether it's Quick Charge, Fast Charge, Dash Charge, WarpCharge, VOOC, Super VOOC, or Super Charge, there's no shortage of fast charging technologies for consumers to choose from (and be confused by). Standing apart from these is USB Power Delivery (PD), which is often misunderstood as being simply another kind of fast charging, but is actually much more.

What exactly is it that separates USB PD from the crowd? Let's explore the main differences between USB PD and the growing collection of other fast charging technologies.

It's an Open Standard
One of the defining characteristics of USB PD is that it is a universal standard available for anyone to use. This gives smaller companies the chance to include powerful fast charging in their devices without having to invest heavily in R&D or pay steep licensing fees, something that consumers feel the benefit of further down the line. Third-party accessory manufacturers can also use USB PD in any way they please. You can find PD ports on power banks, on multi-port wall chargers, on USB-C hubs, and even in airports and on public transport. In the future, as the standard becomes more widespread (it helps that both Google and Apple have adopted it), we are likely to see PD-compatible charging ports pop up all over the place. As impressive as Oppo's fast charging technology is, you're unlikely ever to see a Super VOOC charging port at an airport (or indeed anywhere other than on the official charger).

And it's not just device manufacturers that can make use of PD, developers of other charging standards can use it as a platform for their own efforts. One of the first to do this was Thunderbolt 3 (found on MacBooks), which took the high power of USB PD and added data transfer features. Another good example is Qualcomm, who now use USB PD technology in their Quick Charge 4+ standard. Quick Charge 4+ contains a lot of unique technology and is quite different from regular USB PD, but going forward we are likely to see more and more manufacturers basing their own fast charging primarily on USB PD and adding only minor tweaks (some might say gimmicks) to differentiate it from the competition. The open nature of USB PD, combined with its considerable strengths, mean it's generally pointless to develop a new standard from scratch.

It's Much More Powerful
Another obvious distinction between PD and other types of fast charging is the amount of power involved. Right from its introduction in 2012, USB PD has been capable of a whopping 100W. To put that in perspective, Quick Charge 4.0 is capable of a maximum of 18W, and just 9W is required to qualify as "fast charging". There are good reasons for USB PD being so much more powerful (which we'll cover below), but the fact remains that USB PD offers a level of power that is vastly greater than anything else possible with USB.

The extra power is also generated in a different way. Non-PD fast charging solutions generally increase either current or voltage (beyond the normal levels for USB charging), but not both. This is mainly down to the hardware limitations of non-PD USB charging and restrictions on what a smartphone battery can handle. It takes a lot of trickery with smart negotiation and variable voltage/current to be able to get around these limitations and increase charging speeds. Most forms of fast charging increase the voltage while keeping the current somewhere around the standard 2A, while recently some Chinese manufacturers have been doing the opposite, keeping the voltage at the standard 5V and using very high currents (requiring very thick charging cables to match).

In contrast, USB PD is a complete redefinition of what is possible with USB charging. In the brave new world of USB PD, both voltage and current can be raised to high levels simultaneously, allowing for very high power outputs. The table below shows the the maximum current, voltage, and power of a selection of charging standards. Notice how only USB PD supports both high voltage and high current. The next most powerful standard (Super VOOC) may use very high current, but the voltage is the same as USB 2.0. 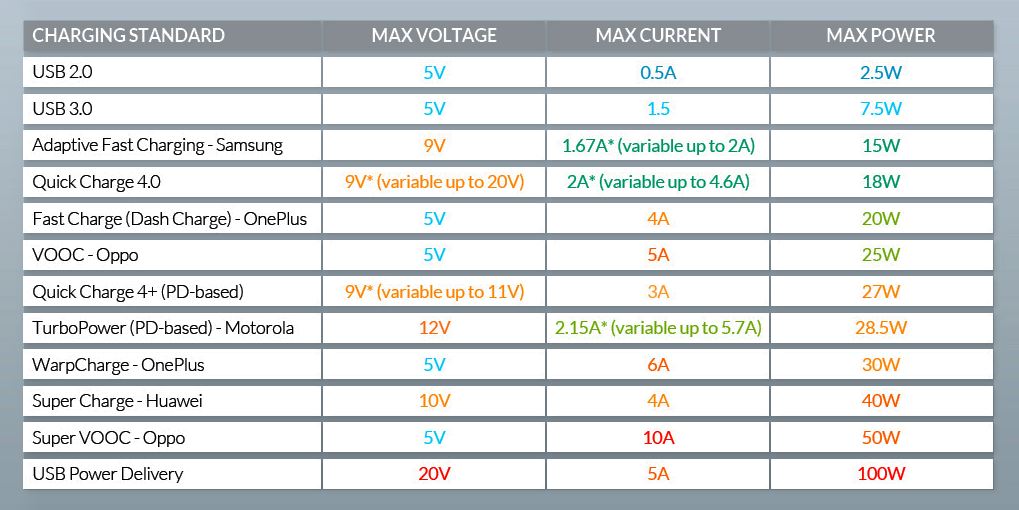 * In each of these cases, the primary figures given are those that produce the maximum power. For example, in the case of Quick Charge 4, maximum power is produced at 9V and 2A. The voltage can be raised all the way to 20V, but this is paired with an extremely low current and results in lower overall power. The purpose of such variation is to improve charging efficiency (sometimes high current is best, sometimes high voltage is best).

No matter how much power is available, all the charging standards above will negotiate the amount of power actually required, meaning there is no danger of accidentally using the wrong charger and overloading a small device. For example, you could charge lightweight wireless earbuds using a 100W PD charger and it would know that only 5W is required.

It's Way More Versatile
When looking at the maximum power offered by different fast charging standards, it's important to keep in mind the purpose they were designed for. Quick Charge 4.0 may output "only" 18W, but that is plenty for most smartphones, and that is all it was ever designed to charge. The proprietary charging standards developed by smartphone manufacturers (Super Charge, Super VOOC etc.) are even more single-purpose in nature and were only ever designed to work with a handful of specific mobile devices. USB PD was created with a much broader purpose in mind, and is just as comfortable charging a smartphone as it is a Nintendo Switch, a MacBook Pro, a printer, or a drone. USB PD is much more powerful than other fast charging standards because that is an integral part of its aim to be ultra-versatile. If USB PD could only output 30W then it wouldn't be much different from the plethora of other standards on the market, and would lose a major part of its versatility.

USB PD is also notable for coming in a wide variety of power specifications. It would be overkill to ship a bulky 100W charger along with a smartphone that can't handle anything like that, so PD chargers only offer as much power as they were designed for. For example, the PD charger that ships with the Pixel 3 is rated at 18W, the charger for the Nintendo Switch is 39W, the charger for the 13 inch MacBook Pro is 61W, and so on. Each of these chargers can still be used with any other PD device, and there is no issue at all with using the 61W charger from a MacBook Pro to charge a Google Pixel (it will charge at 18W, the maximum it can handle). This level of flexibility is not found in other forms of USB fast charging. Indeed, most proprietary fast chargers only come in one power specification, can only work with a specific cable, and can only fast charge a very limited set of devices (and nothing larger than a tablet).

Charging Can Be in Either Direction
Aside from being more powerful and more versatile, USB PD has a few other little tricks up its sleeve. An interesting feature is the ability for charging to go in either direction. This means it's theoretically possible for a PD-compatible device to charge any other PD-compatible device, opening up all kinds of interesting possibilities. For example, a smartphone could charge another smartphone (and return the favor later), a monitor connected to a wall socket could power a laptop, and indeed the same laptop connected to a wall socket could power the monitor. In fact, the device being charged needn't be PD compatible itself. Some enterprising Pixel users report being able to charge wireless earphones on the go from their phone, although this is currently not a standard feature and requires a bit of technical know-how. USB PD reversible charging is currently underutilized, but as the technology becomes more widespread manufacturers are likely to start getting inventive with it.

One widely-available application of reversible PD charging is on PD power banks. Power banks usually need to have separate input and output ports, which leads to unnecessary complexity and bulk (sometimes the input and output ports use different cables). With USB PD, both input and output charging can be done through the same port, simplifying the design and allowing for a more compact product. Other types of USB fast charging are focused purely on getting a wall charger to charge a smartphone battery as quickly as possible, and so clever features like bi-directional charging are not a priority.

Learn More
Hopefully you now have a better understanding of what makes USB PD so unique and exciting. Make sure to check out our range of PD-compatible products, including our new Dynamic Detect wall chargers that make PD even more versatile.