Which Type of Wireless Charging is Best?

Which Type of Wireless Charging is Best?

We are frequently promised that ubiquitous wireless charging is just around the corner, but cables are still holding out as the most common method of charging. There are a wide range of wireless charging technologies out there all claiming to be the one that will finally topple cables and become the primary way we charge our devices, but which has the best chance of actually doing so? Let's take a look at four of the main methods of wireless charging and assess their potential for going universal.

Magnetic induction involves creating an electric field between coils that are contained in both the charger and the device being charged. The coils must be aligned and can't be more than a couple of centimeters apart. The primary advantage of this technique is the amount of power it is able to transfer. The current version of the Qi standard for magnetic induction supports wireless charging up to 15W (several times faster than traditional USB charging), and in future this will certainly increase. Samsung is expected to introduce 20W wireless charging in the near future, and there are a number of companies promoting 40W and 30W standards. Magnetic induction can theoretically support thousands of watts, so when it comes to charging speeds, the sky's the limit.

The technology also has the advantage of being well-established and well-supported, a detail which can't be overstated. Convincing others to adopt a particular technology is often the main barrier to its success, and magnetic induction now has a massive head-start on the competition. Almost all major device manufacturers are firmly behind the Qi standard, and anyone can integrate this style of wireless charging into their device at little cost.

The obvious disadvantage of this style of charging is the lack of range. Devices usually have to be placed onto the surface of the charger, or at least very close to the coils. This is certainly a more elegant solution than having to plug in a cable and dealing with the tangles that inevitably come with wires, but it doesn't allow for the kind of effortless or passive charging that other wireless technologies promise.
Magnetic Resonance

After magnetic induction, the next most common type of wireless charging for common consumer devices is magnetic resonance. Like induction, this also uses coils and magnetic fields, and on paper might look to some like the superior technology. For starters, there's no need to align the coils, and charging can take place even when the device is 2 meters from the charger. This is a big advantage compared to induction and allows for much more flexible usage. It's also possible to charge more than one device at the same time using the same charger, and it can charge through physical barriers.
If resonance is starting to sound pretty impressive, it's important to keep in mind its limitations. For a start, the amount of power than can be transferred pales in comparison to induction–somewhere in the region of 5W. And that is only when the coils are fairly close together, a device 2 meters away will barely charge at all.

The technology also has the habit of transferring power to random metallic objects nearby and heating them up, which is a potential safety issue. Chargers of this type also tend to expend a lot more energy than actually ends up getting used. A number of organizations, including AirFuel Alliance (whose members include Qualcomm and Huawei), are working hard to rectify some of these issues, but in the short term it's hard to see resonance supplanting induction as the primary method of wireless charging for smartphones.

The best use of this technology, at least in its current form, is for specialized uses where the relatively low power is less of an issue, but where the extra range and flexibility is a big advantage. As an example, a pile of wireless headsets used for audio guides in a museum could all be charging at the same time while lying loose in a basket, with people taking and replacing them freely throughout the day.
Infrared

This is one of the most recent types of wireless charging to appear, and created a bit of a media storm when it was first announced in 2015 by Israeli company Wi-Charge. After the initial flurry of headlines about "charging by light", interest died down for a while, although a working prototype was displayed at CES in 2018 and the project seems to be moving forward.

What makes infrared charging unique compared to its competitors is that the energy (in the form of invisible light) is beamed very precisely towards the device being charged, whereas other long-distance methods tend to broadcast energy far and wide. This means charging is relatively efficient, and there are fewer safety concerns about energy spilling into the wider environment and potentially causing harm or interference.

The biggest downside to this method is that it always requires direct line of sight. Promotional videos show the technology (resembling a ceiling light) charging various devices left on tables in a bar. However, if you turned those devices upside down they wouldn't charge at all (the receiver is integrated into the front of the device), and if something were to block the beam, charging would stop. The fact that an external receiver is required is also problematic in the modern era of smartphones with edge-to-edge displays. Back in 2015, when the technology first appeared, smartphones had massive bezels and plenty of space to install a receiver, but nowadays there's simply no room. Separate USB-C and Lightning receivers are available, but then you're back to having to plug in to charge, removing one of the main appeals of wireless charging.

Wi-Charge external receiver connected via Lightning port
Charging is also quite weak, even compared to resonance charging. Promotional materials don't mention exact figures, but the version demonstrated at CES could only charge at around 1W. On the official website there's talk of delivering "watts" (plural) of power, but it seems likely this won't be much more than 2W.
Aside from mobile devices, there are all kinds of potential applications for this technology, including scattered smart home paraphernalia, gaming controllers, or surveillance systems. It's best suited to scenarios where there are multiple small devices spread out across a room or confined area. In such cases, keeping them topped-up using one central charger makes a lot of sense, especially since this system is so relatively efficient.
Radio Frequency

Charging through radio frequency promises the utopian vision of wireless charging where devices are passively charged at long range all throughout the day. Some radio frequency charging products, such as Ossia's well-publicized Cota system, claim to provide "charging via WiFi", which sounds very appealing.

Radio frequency (RF) wireless charging certainly ticks all the boxes in terms of range. The technology theoretically could charge devices several kilometers away, although most of the companies developing RF wireless charging have been working with a range of no more than a few meters. This is still enough to cover the interior of a room, especially when several transmitters are linked together like can be done in the Cota system.

Whether or not charging can take place through walls depends on the wavelength being used. In the Cota system, very short wavelengths are used and so charging is blocked by objects getting in the way. However, they have developed an interesting solution where radio waves (not carrying power) bounce off the walls and find an alternate path, and once the best path has been established the energy follows the same route. This also reduces some of the waste that takes place with cruder systems that simply broadcast energy in all directions.

A radio frequency charging unit
The downside is the amount of power it's possible to deliver through RF charging is quite pitiful–somewhere in the region of half a watt (although at very close range it can be more like 2W). Half a watt is barely enough to prevent a smartphone from depleting its battery, and with the trend towards larger batteries and more power-hungry devices, you'd be waiting for quite some time to top up your device fully. Supporters of RF charging point out that because the phone is passively charging all throughout the day (in an office for example), there's no need for it to be particularly fast.

Perhaps understandably, RF charging generates a lot of concerns about radiation and safety. After all, usable amounts of energy are being transmitted through the air and potentially coming into contact with babies, electrical equipment, or whatever else happens to be nearby. It should be noted that the makers of RF charging solutions are at pains to point out their systems have been tested and shown to be safe, but it won't be easy to convince all consumers of this. There are also question marks about efficiency, especially for RF charging technologies using particularly long ranges. Generally speaking, the further energy has to travel, the less of it will actually reach its destination and end up being used.

There is also the issue of constant charging potentially wearing out batteries. Batteries have a lifespan, and each time you recharge them that lifespan is shortened. Having your device charging all through the day might sound convenient, but in the long term you could find your battery holding less and less charge. Supporters of the technology contend that this issue could be mitigated through the use of software, which would prevent the device from being charged when it doesn't really need it.

Conclusion
As these technologies currently exist, magnetic induction is still the best solution for consumer devices like smartphones, tablets, and laptops. Induction is by far the most powerful of the four (with the potential to become much more powerful in future), is simple and inexpensive to implement, and is relatively efficient. The other technologies are all much better in terms of range, but are weak and sometimes questionable in terms of efficiency and safety. For now at least, these longer-range charging technologies are better suited to specialized applications and smaller devices, and not the mass-market charging of mobile devices.

AUKEY sells a range of wireless chargers in a variety of specifications, some supporting fast charging (and all using Qi magnetic induction). You can check them out here. 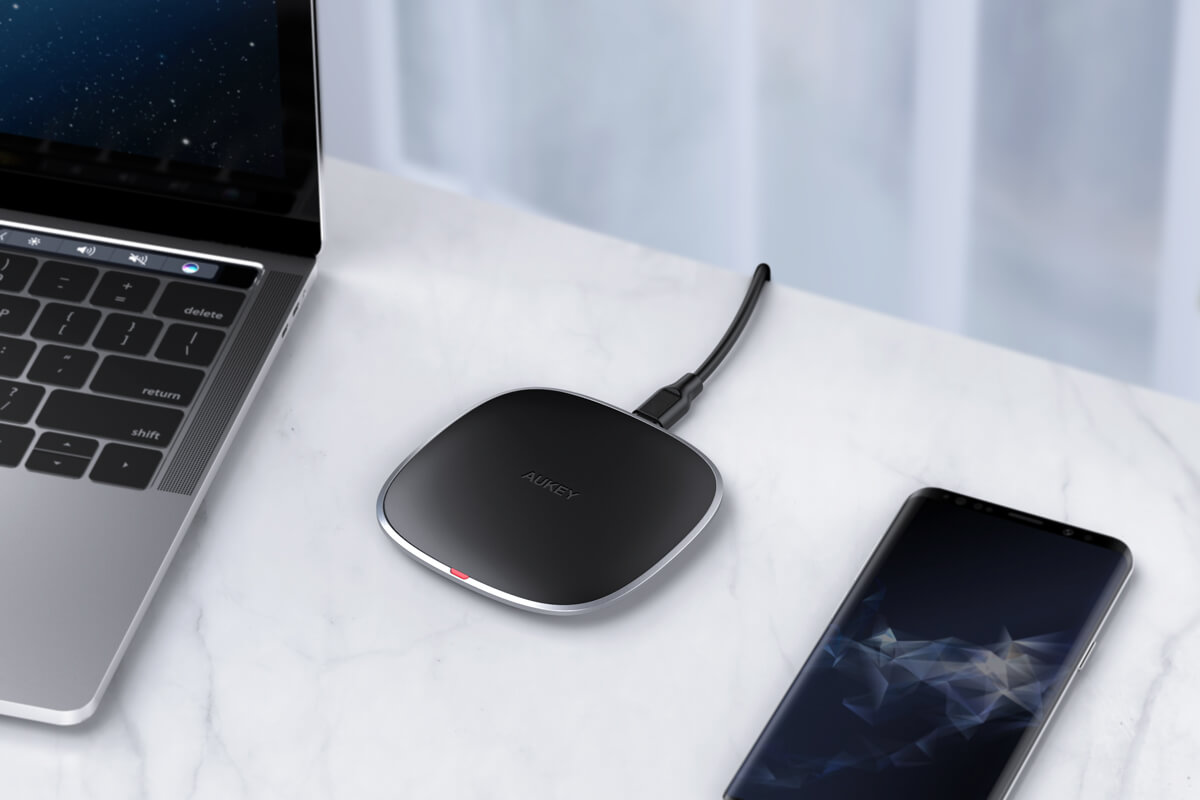