What is Dash Cam Parking Mode?

What is Dash Cam Parking Mode?

Just because your car is parked and the ignition is off doesn't mean your dash cam can rest. When parked on the street, it's not uncommon for vehicles to be grazed, sideswiped, or scratched—not to mention vandalism and theft. Monitoring while the car is unattended is a much sought-after feature in dash cams; a function commonly known as "parking mode".

What Exactly is Parking Mode?
The term is not tightly defined, and different manufacturers use different terminology to refer to the same thing. On AUKEY dash cams, for example, this feature is found under "motion detection" in the menu, and some other manufacturers call it "parking surveillance". Generally speaking, any type of monitoring that takes place while the vehicle is switched off and unattended can be called "parking mode", but these features vary widely in terms of effectiveness. The most basic parking modes simply keep the dash cam recording all the time (like a security camera), but this is extremely inefficient, both in terms of power consumption and storage operation. Better parking modes only capture footage when the vehicle is shaken or when somebody approaches it. 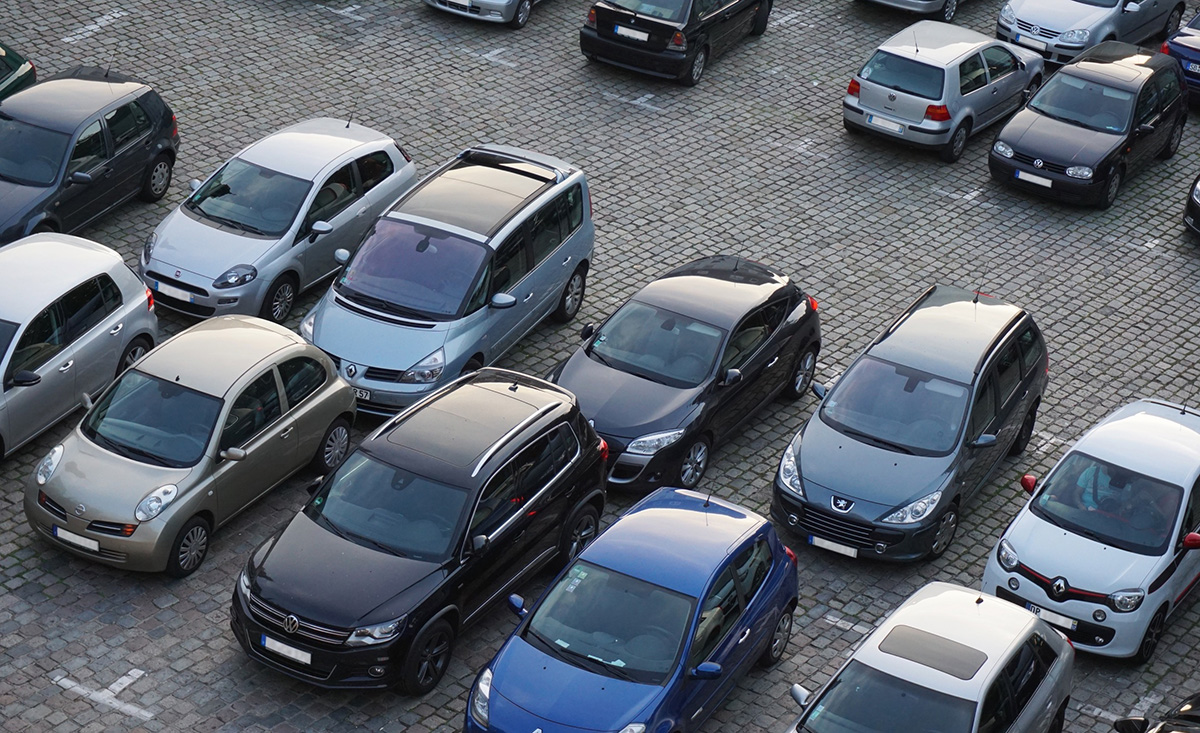 An unattended car doesn't have to be defenseless

What Are the Benefits?
There are countless reasons why you'd want to have an effective parking mode watching over your vehicle at all times. When parked on a busy street, it's not uncommon for wing mirrors to be knocked off or for a passing car to deliver a glancing blow. Usually, the offending driver will continue off into the distance and you'll have no chance of finding them for an insurance claim. With parking mode, the camera would activate instantly and you'd get crisp footage of the offending vehicle's license plate.

Even when well away from busy city center streets, there is still plenty of misfortune that could befall your vehicle. In a quiet parking lot, a passing thief may be attracted to the laptop bag you left on the passenger seat, and there will always be miscreants who can't resist scraping a key across the bodywork of a nice car. In each of these cases, an intelligent parking mode would provide you with a clear video record of exactly what took place. And unlike with traditional survelilance footage, you won't have to sift through hours of footage to find the offending incident—a well-implemented parking mode will just leave you a "highlight reel" to review. 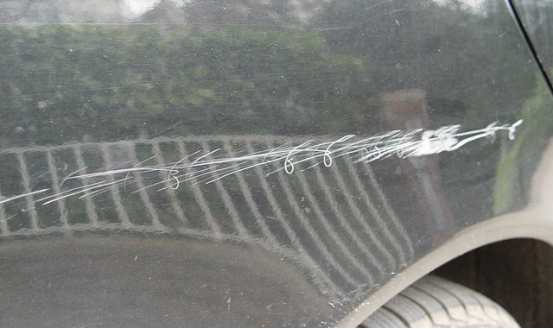 Vandals can be caught in the act

Powering a Dash Cam When the Engine is Off
What complicates any kind of parking function on a dash cam is the need to have a power supply when the vehicle is switched off. Most dash cams are powered through the vehicle's DC outlet (AKA the cigarette lighter), but power is only supplied to this when the engine is running. The main solutions for this are buying a dash cam with an internal battery or hardwiring the dash cam into the vehicle's electronics.

Using a dash cam with an internal battery is convenient (or a power bank can even be used as a makeshift power source) but batteries will run out of power if not regularly recharged. Hardwiring is ultimately the most effective option for those willing to make the extra effort, and is ideal for getting the most out of of dash cams that are powered by modern supercapacitor technology instead of a battery.

If wiring isn't your thing, a hardwiring kit is the easy way to do it. Such kits turn a tricky wiring job into a simple plug-in. All cars manufactured from the mid 90s onwards should have the necessary OBD-II port under the dashboard (usually just next to the steering column). 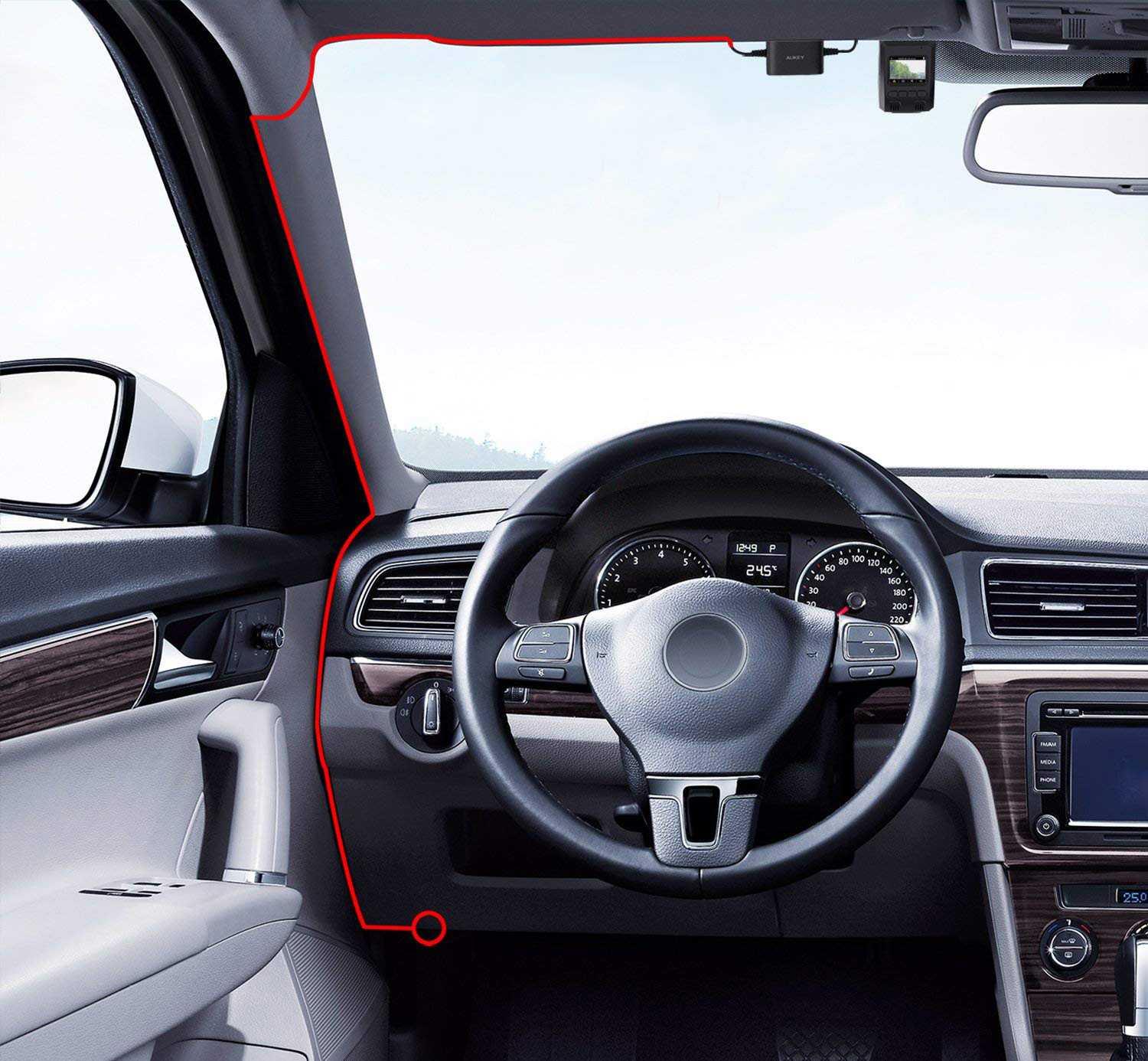 Not only is the OBD port a neater solution in general than using the cigarette lighter, the key advantage is it's able to power the dash cam even when the vehicle is completely switched off, making it the perfect solution for parking mode. It does drain the car battery slightly, but a smart parking mode (like the Motion Detection mode on AUKEY dash cams) barely uses any power at all as the device remains on standby mode until motion is detected.

Sensing Something is Wrong
One key ingredient of a good parking mode is the sensor (or sensors). When investing in a dash cam with a parking mode, it's important to be aware of what kind of sensing is going on and exactly what is being detected. Broadly speaking, there are three kinds of motion detection that are used to trigger the camera, and each has subtly different uses.

Video Motion Detection
Also known as line-of-sight motion detection, this is performed by the camera itself without making use of any kind of additional sensor. Software monitors the camera's live view and if something moves, it starts recording. As you can probably imagine, this can generate quite a lot of false positives (passers by, cats etc.), but it's certainly much more efficient than the camera recording permanently. This type of motion sensing is best in quiet areas or when your car is parked up at night. In such cases, significant movement in front of the camera is uncommon and worthy of recording. Video motion detection is less efficient on a busy street when there is a regular stream of cars and people crossing the frame. In the event of something dramatic happening you'll still have your footage, but you may have to sift through a lot of other recordings to find the key moment. 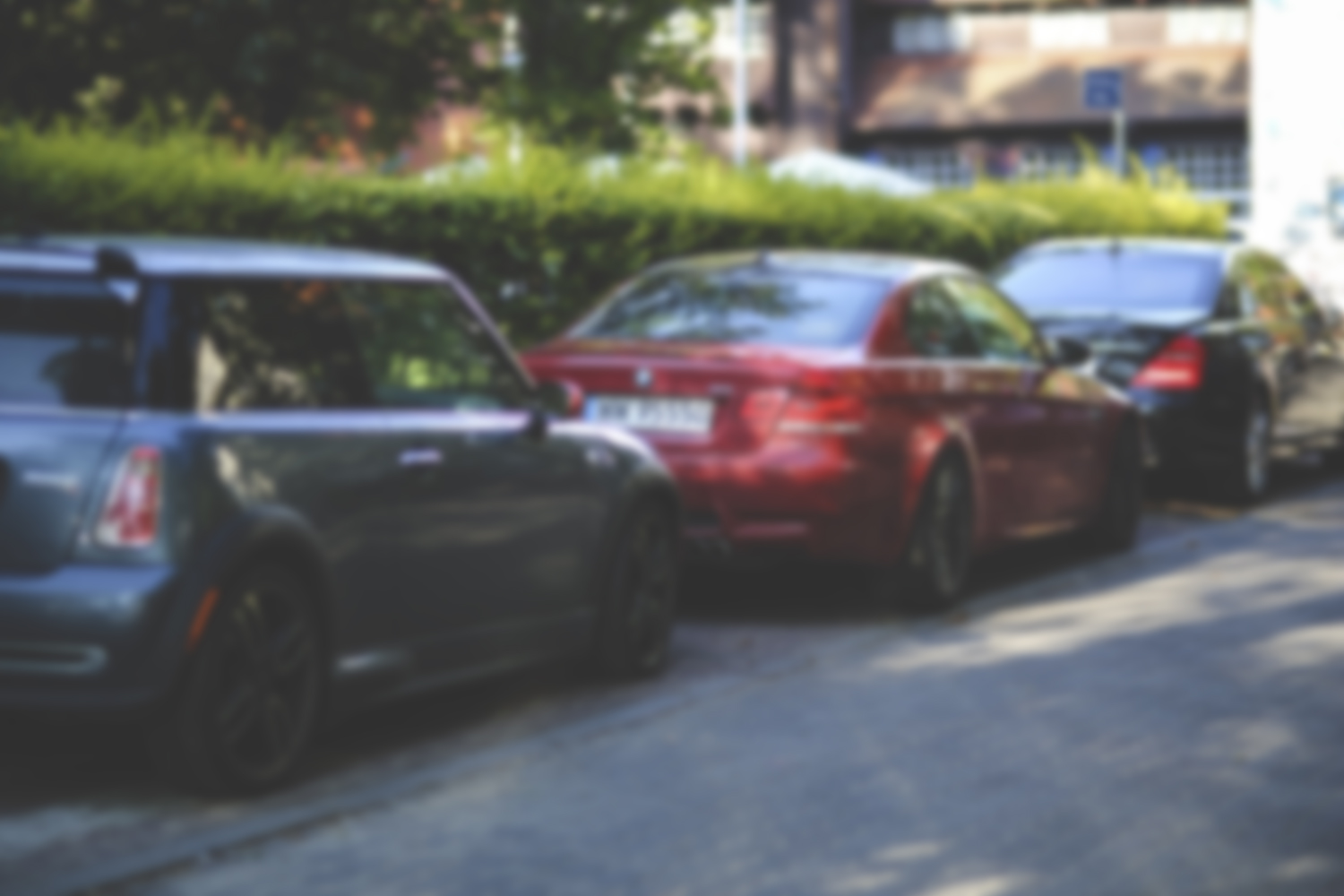 Video motion detection is well-suited to quiet streets
Physical Motion Detection
Another type of motion sensing (often used in combination with the one above) is gravity sensing. This can also be used when the car is moving and can detect collisions and hard breaking. If your car physically moves while parked, a G-sensor will detect that movement and trigger the camera. In normal circumstances your car shouldn't move while unattended, so this type of motion sensing generates much fewer false positives and is excellent at detecting when your vehicle is bumped or when somebody tries to break in. In scenarios where the parked car is surrounded by hustle and bustle this type of motion sensing is the most effective. The downside is it only starts recording once the bump has already taken place, and if the sensitivity is set too low it may not detect light scratches and scrapes.
Radar Motion Detection
The most advanced (and least common) of the three is motion radar. This has similar characteristics to video-based motion sensing, but is much more effective. First of all, a radar system does not have blind spots and can accurately detect motion anywhere close to your vehicle. 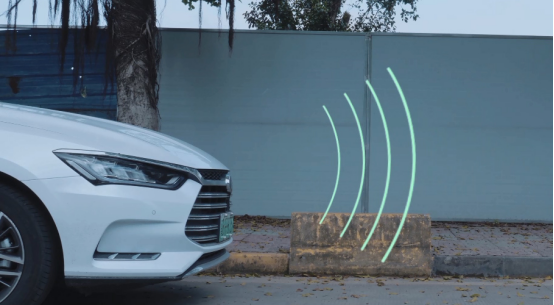 If anything comes within a few meters of the vehicle, the camera will be triggered
Secondly, it generates much less false positives than video-based detection since it only focuses on a range a few meters from your car, and won't constantly be triggered by irrelevant events further away. This type of motion sensing is perfect for those particularly worried about theft or vandalism as it can detect close-up human activity with a high degree of precision.

Most AUKEY dash cams use a combination of a G-sensor and image monitoring for motion detection, and an optional hardwiring kit is available which adds 360-degree motion radar. 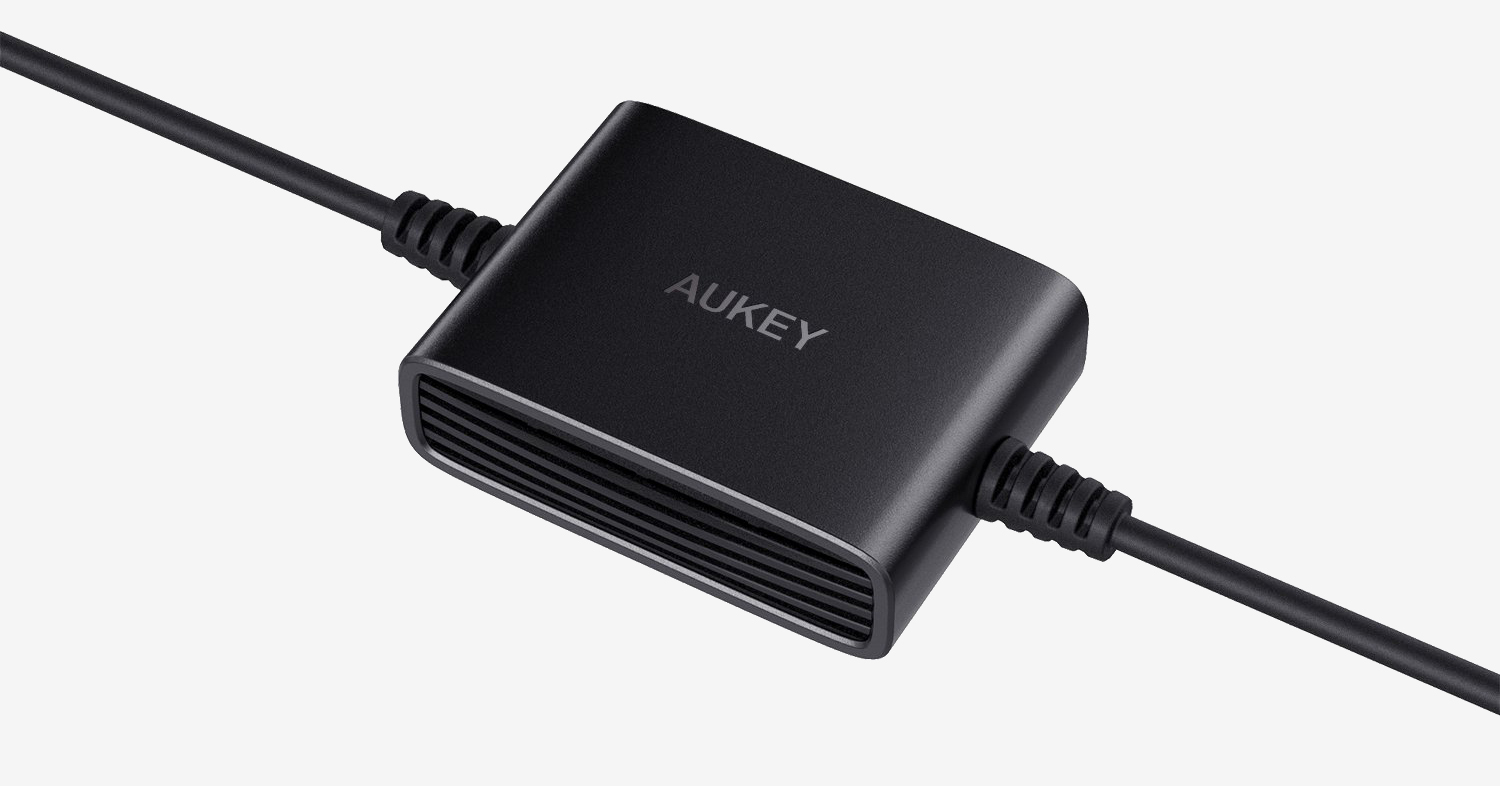